The top is made of Sitka Spruce, glued up from two book matched plates, same as other instruments I have built so I have no pictures of that process.  But the sound hole is much smaller. 18mm.  Traditional instruments have a fancy inlaid rosette, usually with six petals.  After weeks of stewing about how to do that, I settled on a simple circular inlay.  But I still wanted it to look a little bit cool.

In case you haven’t noticed yet, this is the first instrument I have built using all metric measurements.  And I am rather liking the system.

First I cut wedges of rosewood with the grain running to the center and arranged them on paper with purfling pieces in between. Once aligned, I superglued it all together. 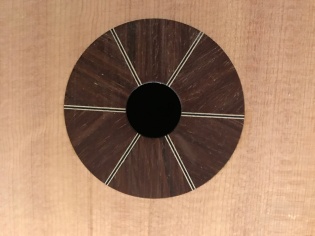 I mounted the glued up mess into the lathe and turned the edge to a 60 mm circle which could be inlaid into the top. The the sound hole was opened up to 18 mm after it was inlaid.

Sound board braces have an 1820mm radius to provide a slight dome to the top.

The seams of the staves were reinforced with bias tape and wood glue. Also note the linings were notched out to receive the end of the braces. Off to the right is my home-made 1820mm radius sanding block and gauge.

That last little peek inside before closing up a box is always hard. I will probably never see inside that instrument again. And if there is anything else I wanted to do in there; its too late.

And so, with some glue and a lot of twill tape and wedges the box is closed.

When the top is dry, the overhang is trimmed flush with the sides. Then the same router jig I use on guitars makes short work of cutting binding channels.

Bindings were attached with wood glue and held in place with tape while they dried. 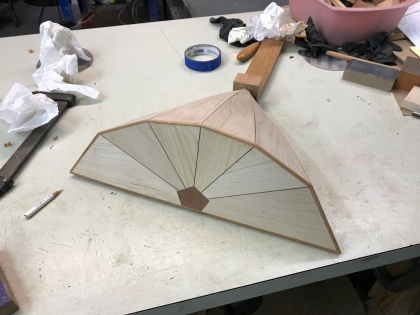 And so the basic box is completed and I turn my attention to the neck and headstock. I guess I skipped over the part where I inlaid the corner pieces. I must not have been in a picture taking mood that day. Sorry.